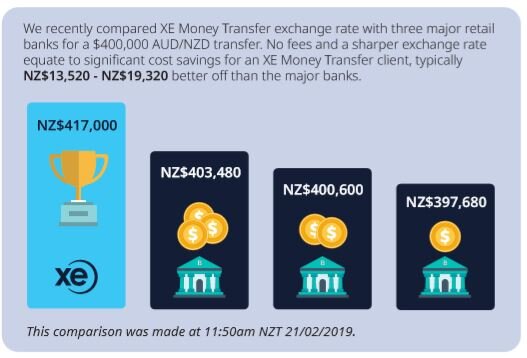 If you are using one of the major banks in New Zealand to transfer currency, you are probably being ripped off with hidden transaction fees.

While banks declare a fee for transferring foreign currency, often the real undisclosed fee is hidden in the exchange rate that the banks are using. The margin between the exchange rate banks disclose and the mid market rate is often around 2%, but can be as high as 5%. in 2020 New Zealanders paid more than $1.6 billion bank transaction fees.

The Australian Competition and Consumer Commission launched an inquiry into foreign currency fees and mark-ups in 2018. It said Australian consumers who used the “big four banks” to send international money transfers in US dollars or British pounds in 2017-18 could have collectively saved about A$150 million (NZ$160m) if they had instead used the lowest-priced exchange service. The New Zealand banks are not as well monitored as Australian Banks and some of the same practices are occurring here.

Lyfords has partnered with New Zealand’s largest specialist provider of foreign currency, XE. The international money transfer industry is one of the most strictly regulated industries. XE is a global business with more than 300 million users worldwide. Their app allows you to transfer funds securely via an internet account or from your mobile phone. XE use mid market rates.

If you are an existing client of Lyfords we can get an XE account set-up for you which will allow you to start saving fees on your foreign exchange money transfers.